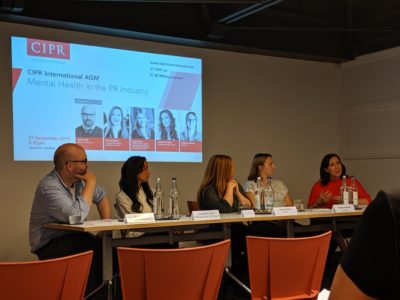 Last week, Jargon PR’s Dani White and Emma Walkom attended the CIPR International’s AGM and panel discussion on Mental Health in the PR Industry. Taken aback by the statistics on the event’s webpage about mental health in the PR industry, we were keen to join the conversation:

“According to The Drum, recent research into the PR profession has exposed that over a fifth of PRs have been diagnosed with a mental health condition, whilst 75% claimed that agency or consultancy communications was the most stressful sector.”

We’re all aware of the high-pressure nature of the PR industry, yet with 1 in 5 PRs having been diagnosed with a mental health condition, it is clear that as an industry, we can and should be doing more to educate ourselves on the matter.

The evening began with CIPR International’s AGM, where the Group Chair gave his report, the committee for 2020 was elected, and they went through all the latest updates from the CIPR. Chaired by Rob Smith, Editor of CIPR’s Influence Magazine, we then settled into an eye-opening panel discussion about the challenges that can be faced by individuals and businesses when addressing the topic of mental health in the PR industry.

Taking part on the panel were Emma Mamo, Head of Workplace Wellbeing at Mind, Rachel Snow, Head of Content, Executive Communications at HSBC, Jacqueline Hurst, Therapist and Life Coach, and Sophie Holland, Senior Research Executive at Opinium. The panel began by exploring why there has been such momentum around mental health discussions in recent years, suggesting that the involvement of celebrities and public figures, such as Prince Harry, have helped to fuel the awareness and openness around these conversations.

‘It’s so new that people are tip-toeing around it’

There’s a lot of positive change happening in the PR industry to be more vocal about mental health. However, there is more that still needs to be done. Through continuing to open the discussion and establishing a balance between the needs of employees and the needs of the business, we can hope to see a greater emphasis placed on mental health within our industry. A huge thanks to the panellists and everyone at CIPR International for such a thought-provoking evening.